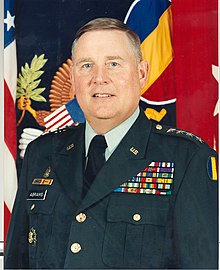 After retiring, Abrams turned a navy analyst for the Associated Press.[4] He was the President and Chief Executive Officer of John Abrams Learning & Information Systems, Inc., a consulting and expertise agency.[6]

He was deputy commander of the Army’s Training and Doctrine Command from 1997 to 1998, and acquired promotion to common and project as TRADOC’s commander in 1998.[7]He served till retiring in 2002.[7]

After promotion to brigadier common, Abrams served as assistant division commander for the first Cavalry Division from 1991 to 1993. From 1993 to 1995, he was commander of the 2nd Infantry Division as a serious common.[7] Abrams was promoted to lieutenant common in 1995 and assigned as commander of V Corps, which included participation in Operation Joint Endeavor.[4]

Abrams’ post-Vietnam assignments included teacher in Military Science on the United States Military Academy starting in 1972.[7] In 1976, he graduated from the United States Army Command and General Staff College at Fort Leavenworth. He commanded 1st Squadron, eleventh Armored Cavalry Regiment from 1983 to 1985.[7] Abrams graduated from the United States Army War College in 1986, after which served as assistant chief workers for plans and operations G-3 for the third Armored Division, adopted by promotion to colonel and project as division chief workers from 1986 to 1988.[7] From 1988 to 1990, Abrams commanded the eleventh Armored Cavalry Regiment.[7] From 1990 to 1991 he was deputy director for operations, readiness and modernization within the Army’s Office of the Deputy Chief Staff for Operations and Plans.[7]

Abrams acquired his Bachelor of Science diploma in Business Administration from Bowling Green University in 1972.[5]He acquired a Master of Science diploma in Public Administration from Shippensburg University in 1986 as a part of his completion of the Army War College.[5] In 2002, he acquired the honorary diploma of Doctor of Philosophy in Military Education and Training from Norwich University.[6]

Abrams enlisted within the United States Army on January 16, 1966 and after completion of his preliminary coaching he attended Officer Candidate School.[4] He graduated on February 3, 1967 with a fee as a second lieutenant of Armor.[5] Abrams was assigned to 2nd Squadron, 1st Cavalry Regiment at Fort Hood throughout its coaching previous to deploying to Vietnam.[5] His Vietnam War fight assignments with the squadron from 1967 to 1969 included platoon chief for B Troop, govt officer for A Troop, commander of A Troop, commander of C Troop, and commander of the squadron’s Provisional Rifle Company.[5]

Abrams was born at Fort Knox, Kentucky on September 3, 1946, the son of General Creighton Abrams and Julia (Harvey) Abrams.[1][2][3] He graduated from Frankfurt American High School in 1964, and attended Bowling Green University earlier than deciding to enlist within the United States Army.